Use the comment sections to tell what you think! 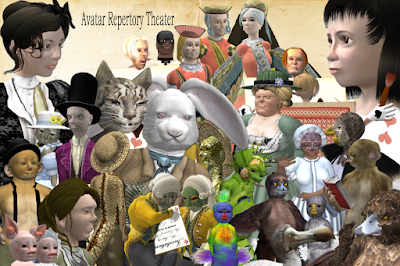 
Avatar design for virtual theater is aimed primarily toward expressiveness. It's also important that our actors be able to change avatars and costumes quickly, attach props and use them easily, and move their avatars appropriately.

Another important consideration is server and viewer resources. Every vertex and pixel on an avatar, and every movement, must load into that actor's computer and graphics card, then up into the server hardware and software, then back down into audience computers and graphics cards. Too much data takes too long, so we have to build efficiently – as few vertices and pixels as possible.

Before figuring out how we want our avatars to look, it's first important to know how we make our avatars move. Our actors move their avatars while saying their lines, so that you are hearing and seeing our avatars speaking and moving live. Yes, that takes some practice!

This is how a virtual theater actor moves:

Once I know what a character is going to need to do, I can, working with the director, start figuring out what he or she or it will look like.  I also start thinking about how an actor will use each costume piece and prop, so that they'll display appropriately in Inventory and the “My Outfit” links, and be easy to find.
Oedipus Rex 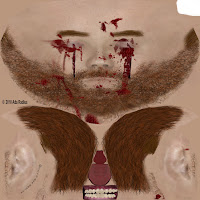 With the simulator, grid and viewer software that is available to us now, we can't make varying mouth movements triggered automatically by Talk if we cover up the default avatar face. We can make a simple “Talk Jaw” - a hinged device, useful for some creatures, but the sound volume doesn't affect the movement. For now, it's usually better, for actors and audience, to use the default avatar face morphs. So I create a “skin” for the default avatar for any parts that will show, i.e., not covered by an attachment – particularly the face. You can see some examples here of human and non-human face textures that will map to the default avatar face.  It's similar to the way we see a map of the world on a flat surface, except the avatar body parts here are cut up differently to make flat areas for texturing - ears, teeth and skull separated from the face. 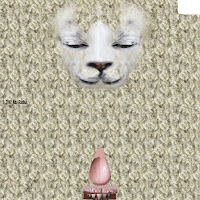 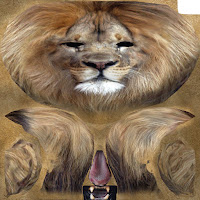 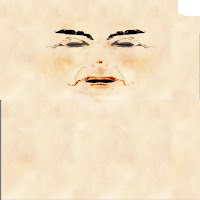 Sheep, Lion, Humpty from Through the Looking-Glass

Then I have some decisions to make.

The first is avatar shape.
Avatar shapes can be designed inworld or, by importing the default shape with a plugin, in software such as Blender. Adjustments can be made to the avatar “skeleton” for height, limb length, shoulder width, etc., and to the mesh (the outside vertex shell) for some flesh adjustments, such as breast size and limb thickness.  We can also deform and re-import the skeleton from 3D modeling software for dwarfs, giants and animals.
The default avatar also has a “Hair” layer that can morph eyebrows, scalp and (for males) facial hair areas. Shirt, pant, shoe and skirt layers can be deformed for such things as high heel foot position and bell sleeves, which will affect layers over it – a bell sleeve on the shirt layer will affect the sleeve shape on the Jacket layer, for example.

Then I start working on texturing the default avatar pieces that I want visible.

Each component of an avatar's skin – head, torso, hips and legs, eyes, scalp&eyebrows uses a 512x512 pixel image (“texture”), except for eyes, which are 256x256. If you use a bigger texture (1024x1024 is the biggest allowed in the system) it may take longer to load and will be converted to 512x512 on the avatar skin. A smaller texture will also be converted to 512x512 and won't display well. If I know a component of the avatar skin will be completely covered, I'll use my own 4x4 blank texture (the smallest allowed in the system) on that component.

There is a default set of system “clothes” for the default avatar, and they can be very useful – undershirt, underpants, socks, gloves, shirt, pants, skirt, jacket and shoes, each of which is painted onto the avatar shape in order (underpant layer can't be stacked on top of pants, for example). Each of these clothing layers displays a 512x512 pixel texture, same as skin. There is also a tattoo layer which displays just over the avatar “skin”, and an alpha layer that can be designed to selectively make a part of the avatar, including clothing layers, disappear. This is useful under attached costume pieces.  All of the system skin and clothing layers move with the avatar animation automatically.

The OpenSim avatar also has 30 attachment points for props and costume pieces. Eyes, ears, chest, etc. More than one attachment can be added to a point, if the actor is careful about setting up attachment order, and so that the additional piece doesn't replace the previous one.

For several years in Second Life and the OpenSim grids, “attachments” were limited to inworld prim pieces. Then sculpt (a pixel-based representation of shape) maps came along, which gave us more shaping options. Sculpt maps are still useful for animating shapes – Medusa's hair, for example. Prim and sculpt attachments are still used quite a lot, but will not “move” with an animation, except to stay attached to the attachment point. Sculpt maps are harder on viewer graphics cards than “mesh” attachments.

“Mesh” attachments are now widely used, now that they're visible in most OpenSim grids, viewers, and audience hardware. “Mesh” is a misnomer, of course – every thing we see in a viewer is “mesh” - vertices and faces, painted with texture images. But for this purpose, the term “mesh” refers to a 3D model, a dae file, that is created in software such as Blender or SketchUp, and uploaded to the grid to use instead of or in addition to the inworld builder tools (“prims”) or “sculpt” maps.

A mesh attachment has a huge advantage over prim and sculpt attachments, because it can be created with better modeling and texturing, and  “rigged” to move with the avatar animations. We can upload the default avatar mesh model to Blender, get it dressed, and rig the clothing to the avatar so that it'll move, not perfectly, but recognizably, on the avatar inworld. It doesn't have to be perfect, it's a cartoon.

Here is an example of all that put together – one of the avatars we used for our video “Flying Saucers Return” last year. Our goal was to make them weirdly funny.

This is one of the triplets – ugly babies – in the story. I adjusted the default avatar to make the shape, snagged a child skin and mesh eyes I'd made for another show, and deformed the skeleton to make it small with a big head. Then simple mesh jammies with an off-the-shelf texture that I rigged to the avatar skeleton. I ended up  combining the deform rig with the jammies – one less thing to wear. One of our troupe members, Rowan Shamroy, created the animations, so they could sit in the grocery cart, fighting and drinking. From that we made NPC characters (NonPlayerCharacters – scripted animated avatar representations), and shot the footage. 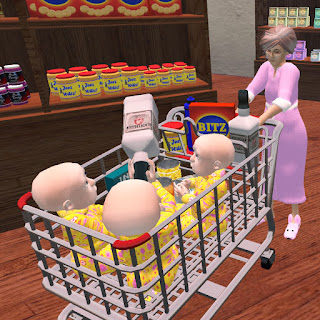 Triplets with Big Mama at the grocery store.
https://www.youtube.com/watch?v=PtK6wdCgKnY to see the video, and for additional credits.
Posted by Ada Radius at 4:45 PM

We appreciate your feedback. Inappropriate posts will be deleted.